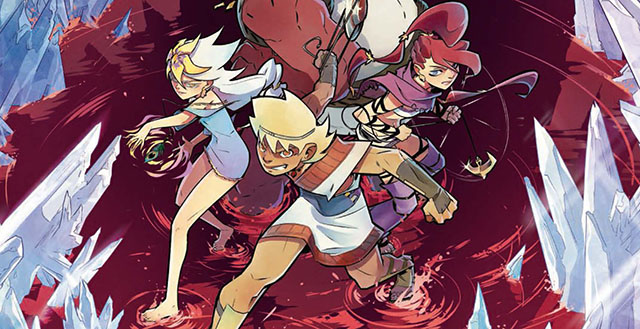 Here in Paris and Brussels, we are gearing up for the London (March 12-13) and Bologna (April 1-4) book fairs. If you’d like to schedule a meeting with us at those fairs and haven’t yet, it’s not too late! Write to us soon; we still have some slots open.

In the meantime, we wanted to present you with our publishers’ latest winter releases. February has shaped up to be a glorious month for children’s titles! In Télémaque, Kenny Ruiz and Kid Toussaint’s take on the story of Odysseus’ son, the impatient, immature prince Telemachus decides to go looking for his long-missing dad. On the way, he meets a princess and many a vengeful god and scary monster. The second volume of this successful new kids’ adventure series has just come out and we’re pleased to be able to show it to you in French and in English, via Europe Comics. Check out the “kids and family” section below for plenty more spirited children’s titles, like “Animal Jack,” the kickoff volume of a series about young rebel Jack, who is mute–and has the astonishing ability to transform himself into any animal he chooses!

Art at the heart of comics
Comics are a celebrated art form, officialized in the F

A world of pure imagination
Social distancing is proving challenging, and it is onl

Art at the heart of comics
Comics are a celebrated art form, officialized in the F

A world of pure imagination
Social distancing is proving challenging, and it is onl