He then had the chance to assist the illustrator Frank Robbins in the USA with his series “Johnny Hazard”, which would have a very marked influence on his budding style.

He returned to Paris in 1967 and taught art. He contributed to the news pages of Pilote and teamed up with the scriptwriter Claude Moliterni to launch the pilot and adventurer “Yves Sainclair” in Phenix, two books of which were published by Dargaud in 1975 (rechristened Yves Saint Clair, this short-lived clone of Johnny Hazard was recently the subject of twenty-six medium-length animated films).

After the death of Jijé, Jean-Michel Charlier asked him to take over “Tanguy et Laverdure”. He finished the book “Opération Tonnerre” in 1981, which the old master had left unfinished, and produced the two subsequent episodes, “Plan de vol pour l’enfer” and “L’espion vient du ciel”.

He started the series “Kim Woilf” at Dargaud in 1991, which stopped after the first issue, and in 1994 he adapted “Les Fourmis”, the successful novel by Bernard WerberDe, as a cartoon for Albin Michel. As a result of his training, Serres is certainly the most American of the French authors, with a perfect mastery of Milton Caniff’s black flat tint technique, drawing all technical devices scrupulously but with proportions which do not always match those of the characters, one of the characteristics of Robbins.

If he has not produced a great deal of work, it is because he has had a number of parallel or intertwining careers: producer and director at France Inter, Antenne 2, FR 3 and Canal plus; editor of the monthly magazine Hara-Kiri; manager of production companies… 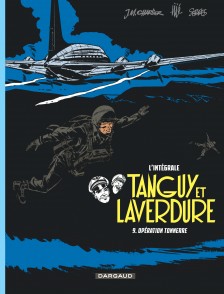