Aurelie Levy is a writer and director.

Born and raised in Paris, she left France at 18 to pursue her higher education in Japan. After a yearat a traditional girls’ college in Nagoya where she learned the Japanese language and culture, she went on to study Japanese history and film at the prestigious ICU in Tokyo. She then pursued her film and history education at UCLA.

At 23, she became John Cusack’s assistant. Alongside Cusack, with whom she worked for five years, she learned the ropes of the film industry and was projected into the motley universe of the actor and activist. From Bob Dylan, Larry Page, Sergey Brin, Hunter S. Thompson and Naomi Klein, to Bill and Hillary Clinton and the then-Chicago based Obamas, she was exposed to some of the most iconic figures in American politics, economics and culture and uncovered the intracacies behind the curtains of Hollywood.

In 2007, she directed her first documentary, Lost and Found. The film follows Casey Johnson, 27-year-old heiress to the Johnson & Johnson pharmaceutical empire, a blond, exuberant “page six socialite,” who travels alone to Kazakhstan to adopt a 9-monthold orphan, only to succumb to her misery in January 2010, leaving behind her adopted daughter – the new heiress to a fortune estimated at several billion dollars.

Back in France, Aurélie continued to travel. This time, through France with Anthony Bourdain for two episodes of his infamous program: No Reservations.

In 2012, she wrote her first novel, And the Oscar Goes to, a French Devil Wears Prada. Following the success and critical acclaim of the book, TV network OCS entrusted her with writing three feature-length documentaries on the history of major Hollywood studios: MGM, Paramount, and RKO. The films retrace the myths and often dark secrets that paved the journey of Hollywood’s “moguls” from the silent era to today and argue how their craft forever influenced the collective psyche.

In 2017, after the success of the series, again for OCS, she directed two feature-length documentaries on Hollywood couples. The first on John Cassavetes and Gena Rowland, the second on Vivien Leigh and Laurence Olivier.

For the past three years, Aurélie has been following a group of young photographers around the world, determined to blossom artistically off the beaten path, for the documentary series Off the Grid.

Her latest book entitled The 21st Man, published in May 2020 by Anne Carrière, discusses men in the #metoo era. Through a series of intimate conversations, men of all walks of life open up about their sexuality, relationship to money, success, fatherhood, and married life. They share their struggles, insecurities and sometimes buried secrets. The book offers unprecedented insight into men’s inner life.

By the same creator...
Anne Carrière 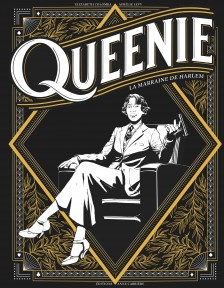